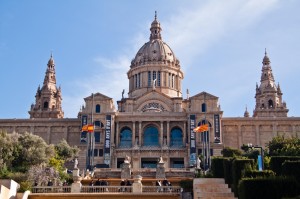 Last week’s Mobile World Congress 2011 in Barcelona proved to be a hugely valuable event for Masabi, allowing us to significantly raise our profile on the global stage.

From the Masabi pod on the UKTI stand we showcased our transport m-ticketing software that is rolling out across the UK and is set to bring a sweeping change to the way ordinary passengers buy tickets for travel. 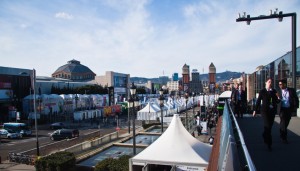 The stand allowed the team to meet with a wide variety of international business people who were interested in the potential applications of our transport m-ticketing software in foreign markets.

Among the highlights of the show was CEO Ben Whitaker meeting with Lord Stephen Green, the UK Minister for Trade & Investment. The discussion centred around how Masabi’s technology is being applied to the transport industry – a sector in which politics and investment play active roles – to increase ticket sales capacity while at the same time reducing operating costs for train companies. 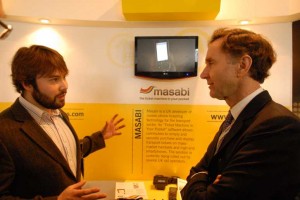 After meeting Lord Green, the Sky News crew that was covering the Minister’s visit stopped by the Masabi pod to interview Ben about the technology, which is due to go live with Chiltern Railways in the spring, closely followed by a number of other transport operators.

Clips of the interview and Ben meeting Lord Green can be found here: 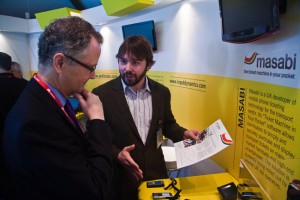 The stand of the show was by far and away the Android exhibition, which featured a smoothie bar, a make-your-own Android workshop, collectable Android pins and even a slide!

The Masabi exhibition space was provided by the UK Trade & Investment team, who did an excellent job of organising the companies, providing introductions to international contacts, and publicising and promoting the considerable talent of UK technology at the event.

See you next year!