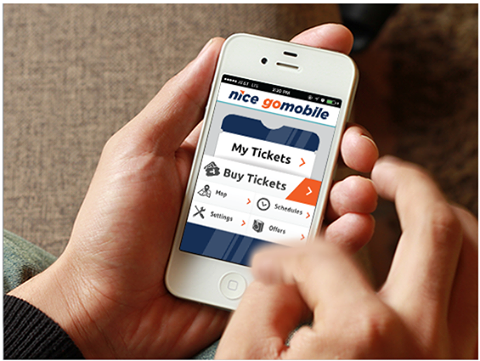 June 3, 2014 - Veolia Transportation has rolled out the “GoMobile” fare payment app on the NICE bus system on Long Island, making NICE the first bus-only U.S. transit system to offer smartphone-based mobile ticketing. The app enables passengers to purchase, store and use tickets with a smart-phone app, which greatly increases their convenience. Upon boarding, riders display to the bus operator a secure, visually verifiable ticket on their smartphone. NICE partnered with Masabi, a leader in mobile ticketing and electronic payments for transit, to bring smartphone ticketing to NICE bus riders.NICE is a public-private operating partnership between Nassau County and Veolia Transportation. Veolia manages all aspects of the transit system under contract to the county, effectively serving as the transit agency.

“Mobile ticketing is really taking off in the U.S. and NICE is excited to be at the forefront in bus transit. In the coming months, we look forward to rolling out additional technology initiatives that will help transform transit in Nassau County,” said Michael Setzer, NICE Chief Executive Officer and VP of Veolia Transportation. “Over the decades, fare collection for Nassau’s County’s buses has evolved, however, one area that has not changed much is cash payments. With GoMobile, we’re taking a big step to improve that situation.”

Based on extensive customer surveying in late 2013, NICE learned that about 70 percent of all its riders have smartphones. A follow-up web survey indicated that customers were excited by the upcoming launch. In a few months, NICE’s paratransit system, known as Able-Ride, will also use a version of the app allowing customers to prepay their fares online and on their smartphone.

Prior to GoMobile, NICE riders had limited payment options: passengers could either pay with correct change on the bus or use the MTA-issued MetroCard. However, there is only one location in Nassau County with full-service vending machines for MetroCard, and a limited number of resellers. With the introduction of GoMobile, NICE is not eliminating any existing payment options, including cash.

NICE’s commitment is to move quickly to innovate and capitalize on today’s technology to better serve its customers. Mobile ticketing is the first step in NICE’s evolution. The next key step is a multi-format reader that NICE is currently testing on one vehicle, which NICE will test on several units over the summer. These readers are format agnostic; they are capable of accepting barcodes, contactless bank cards, proximity smartcards (e.g student or Employer ID cards), and emerging payment technologies such as Bluetooth Low Energy.

“Our hope, in terms of the future of fare payment, is that customers will be able to use what is already in their pocket at the bus stop or train stop,” said Joshua Robin, Masabi Vice President.

Another key aspect of NICE’s technology evolution is the NICE Integrated System (NIS) which Veolia expects to roll out later this year on the Nassau County fleet. It is a comprehensive, advanced GPS-based intelligent transportation system that will offer numerous integrated features designed to improve the rider experience and enhance operational performance. NIS offers many monitoring and control features that will make it possible to improve system performance, such as improving on-time performance, relieving overcrowding and bunching of buses, and detecting maintenance issues and bus breakdowns. The new system features an open architecture that allows for the development of real-time tracking apps, which will also be included in future versions of GoMobile.

Nassau Inter-County Express, or NICE bus, is the bus and paratransit system that operates in Nassau County, which is just east of New York City on Long Island. NICE serves about 100,000 riders daily and currently operates 52 routes with a fleet of 300 fixed route buses operating as NICE, and 95 paratransit service vehicles operating under the name Able-Ride. Visit NICE’s website at www.nicebus.com

Veolia Transportation is the largest private-sector operator of multiple modes of transit in North America, including bus, rail, paratransit, shuttle, and sedan and taxi services. Veolia Transportation is committed to setting the standard in safe and sustainable mobility solutions through partnerships with cities, counties and transit authorities. The company is based in Lombard, Illinois near Chicago.