Urban mobility applications have sprung up around the needs of cities and their inhabitants, enabling them to move around quickly and with less hassle.

Services such as Uber and Lyft have had a disruptive effect on the way people move around cities. These services have sometimes been viewed by transit authorities and operators with suspicion and as a potential threat to ridership.

It’s easy to understand why.

If it becomes easier to order a car, then surely people will move away from public transit and onto the road, and if that happens, ridership will fall.

This makes sense when you think about it, but peel the onion and things are a little more complicated than many first thought.

Some people will undoubtedly choose ride-hailing over mass transit - for example, choosing Uber over taking the bus. However, is this the full picture?

A recent report by Morgan Stanley which cites research from the University of California, Berkeley, stated that many ride-hailing trips would have otherwise been made in privately owned cars. Furthermore, if a significant number of car owners turn to 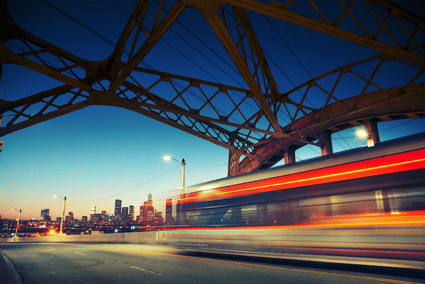 ride-hailing full time, then more people are going to be inclined to utilize public transit as they become more used to using other options.

“It has the potential to dissuade users from relying on single-occupancy car trips,” state the authors of the Morgan Stanley report, “which in turn is consistent with greater reliance on transit.”

The report emphasises the movement away from “competition” between various transport types, and instead highlights the move towards partnerships between them.

“It’s easy to think of ride-hailing services like Uber and Lyft as being in competition with public transportation. But they could actually end up causing more people to use it,” writes Ryan Grenoble in The Huffington Post.

When you think about it, this makes a lot of sense. When using public transit, you very rarely are able to step out of your front door and get off at your destination. There are two important parts to the journey missing – this is what the industry calls the “first-mile/last-mile” problem.

By making it quick and hassle free for people to get to and from their nearest stop or station you are making it easier for people to use transit services. The growth in services such as Uber and Lyft should actually see an increase in public transit adoption as the advantages of public transit shift the balance away from car ownership.

This is great news as we try to look for smarter, better, more efficient ways of making our cities work for their inhabitants.

As the need for urban mobility continues to grow, It’s not always possible to add public transit capacity quickly or inexpensively. Cities are now faced with a challenge: how to make city journeys as fast, easy, and efficient as possible.

How do they accomplish this?

This brings to the fore the idea of smart transit for Smart Cities - a developed urban area with the overall purpose of creating sustainable economic development and an improved quality of life.

We believe the next step in the development of the Smart City is to create ecosystems of best-of-breed apps for seamless, frictionless, door-to-door journeys built around the needs of individual cities.

There is no point in a public transit authority investing in a route planning application if everyone already uses services like Transit App or Citymapper. There is very little chance the app the city launches will provide a better service than already exists and changing people's habits is extremely difficult.

The answer is not to replace them - but to work seamlessly with them.

We see the future as people being able to use their mobile ticketing application to buy their ticket to travel, check their route, order a bike from the city bike service or request a taxi, making journeys as quick, convenient and hassle-free as possible.

We believe this should be done not by creating an unmanageable single ‘super app’, but rather by linking to best of breed applications that already exist in city ecosystems.

By utilising a common set of open APIs and standards it is possible for related applications to interact, allowing users to surf between services in the same way they would on the web. This helps remove the barriers between different city services, modes of transport and operators.

The result is less stress and quicker, easier travel using your smartphone.

At Masabi we already deep-link to other services through our applications and we have further deep-linking apps due to go live this year.

We believe ecosystems of connected apps will continue to develop around urban areas over the coming years helping people move around our cities.