There are a few interesting points raised in the technical details accompanying Sony-Ericsson's recent announcement of the Aino and Yari handsets - app usability should improve, whilst Sony-Ericsson's smartphone platform strategy is tending towards the Samsung "try 'em all" approach...

Most importantly for developers, the new handsets aim to reduce the permission dialogue hassle that users experience when running applications on their handsets. This is a huge bugbear which just adds user pain without really improving security - because users rarely read the (often opaque) language of the message, they just click and get annoyed at the jarring interruption in their workflow: 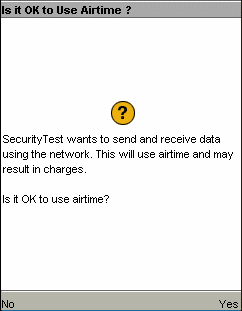 The absence of these interrupting dialogues in iPhone applications adds to their usability. They have clear purpose, but MIDP has always erred too far to the side of caution, and allowed explanation messages to be written and translated by programmers not usability experts, to confusing effect. They simply annoy, and give the platform a slightly amateur feel.

Sony-Ericsson suggest that Unsigned apps will now show far fewer dialogues, and Trusted 3rd Party signed apps will be able to ask once and then never bother the user again. This is absolutely excellent news because it eliminates a key barrier to regular app usage.

Sony-Ericsson says this is in line with recommendations in the MSA spec - an umbrella JSR mandating the support for a huge range of APIs adding up to a very powerful platform, which is now gaining a lot of traction. This is also a great thing, because it implies that Sun recognise the problem, and that other handset manufacturers may be following suit.

Whilst in general I am in favour of reudcing the permission overhead to a secure minimum, this can go too far. I am quite worried about the idea that dialogues may not be required when implementing the upcoming Javascript APIs designed to allow webapps greater access to the handset hardware - the potential for malicious scripting is huge.

Hopefully Javascript will find a more sensible balance where MIDP at first did not, because HTML 5 is opening up some exciting opportunities. Given, however, that browsers shipping today appear to be replicating all of the proprietary manufacturer-specific API problems of early MIDP, I'm certainly not holding my breath!

In the good old days, Sony-Ericsson were pioneers in the smartphone market with the P800, back when everyone thought a smartphone should be like a PDA. Looking back, my gut feeling is that on every subsequent revision UIQ (a UI layer built on Symbian) dropped further and further from the leading edge, striking an unhappy balance between mainstream usability and PDA power. UIQ finally went under when Nokia took Symbian open source without them, leaving Sony-Ericsson without a smartphone platform.

This is roughly the point when Sony-Ericsson launched the Xperia, a Windows Mobile handset that was very interesting, though ultimately didn't fully live up to expectations. A lot of effort was put into encouraging developers to build panels and things (proprietary UI extensions), but to the best of my knowledge they haven't announced any more Windows Mobile devices - and hopefully they'll stay that way.

Subsequently, Sony-Ericsson stated they would be focussing on the Android platform for future smartphones... and then announced two S60 handsets. They have dropped hints that Android wasn't to displace other OS platforms, but can a company in Sony-Ericsson's state really support simultaneous development on two or three smartphone OSs as well as their (actually very good) proprietary feature phone OS? Note that smartphones are only around 13.5% of current world handset sales (although at the lucrative end)...