Making Mobile Commerce Relevant for the Man on the Clapham Omnibus

Making Mobile Commerce Relevant for the Man on the Clapham Omnibus

The unpleasant reality that we've learnt from 8 years working in mobile:

Just because you can do something with mobile technology

(acknowledgement to Faris Yakob for bringing this insightful quote to our attention at the Cellcom Conference in Israel)
This gem from Adams proved almost completely accurate with my own deep suspicion of blogging, twitter and facebook, compared with a colleague a few years younger who likes blogging and facebook but still rejects twitter as the work of the devil. Rather typically, neither of us has ever sent an MMS message or made a video call.

Newer technologies like Mobile TV, MMS, Twitter, Flickr, Youtube and Facebook are not mass-market user requirements outside of media land and the internet youth - so what can the mobile industry do to get the normal mobile user into using m-Commerce or more advanced phone features?

Normal people only try a new technology if the old way of doing it is painful enough to make them get over their fears and give something new a try. The trick is that it is exactly when the user is in pain that you must offer them the improved mobile service - they won't bother to sign up later on the internet. 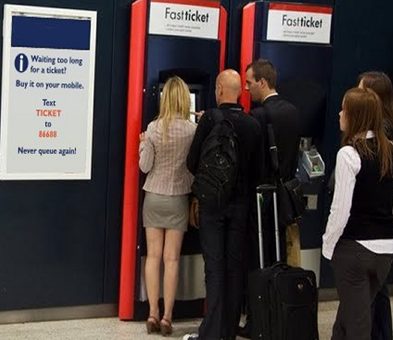 We are following this exact mantra with the Mobile Ticket Machine that we are building at the moment for some of the UK Railway companies. Late-running customers regularly miss their trains - queues are a frustrating pain point for them. It is in these painful queues that we display adverts to persuade normal people try using their phone to buy the ticket - and then use their phone as the ticket, never having to queue again. We make purchasing streamlined, without any usernames and passwords to get in the way, and use technologies like SMS fallback to ensure reliable access. Immediate servicing of the customer is the main requirement.

Our early trials in 2007 with Chiltern Railways on mobile ticket purchasing via credit card revealed a startling result - many of the mobile ticket trial users were not just middle-youth technophiles. Going against our stereotypes, we discovered they were older and more female, on average, than we expected and had never before use their phone for anything but voice and SMS. The potential benefit of avoiding queues in the future was enough to make them willing to try five new technical steps in one go:

Staggering, really - these people had never had any motivation in the past to download ringtones, logos or games and certainly no desire to do Twitter updates. Note that the service didn't target just smartphones - it was available on standard phones as well, because a service with mass-market appeal should be available to the entire mass market.

After trying a mobile application for the first time because of significant need, a user will have a lower barrier to trying new mobile technology for less critical things in the future. They have already faced their fears and learnt the tricky steps to download an app and make a mobile purchase.

A discussion of the business case (and the related business politics) for mobile rail ticketing is another article in itself. Suffice to say that the service has to have a measurable effect on Cap-ex and Op-ex for the Rail Operators, be acceptable to a multi-franchise ecosystem of seperate and competitive companies, and also enable a quick and cheap "soft rollout" launch to prove interest and benefits before significant hardware Cap-Ex commitment is incurred. This can be contrasted to the stalemate existing with the chicken-and-egg issues of NFC service rollout.

Mobile is not the mini-internet. It was essential that this particular project offer a mobile service, not just an extension of the internet. It offers a complimentary service to in-station ticket machines and staffed wi
ndows, which still account for well over 70% of rail ticket sales in the UK, whilst solving problems for the customer in a way that fits tightly to their existing habits. It was never expected to compete with the web, or service web customers when they were away from their PCs.

I think that many of the future mobile commerce success stories will involve providing more traditional self-service options in the physical world - certainly, mobile banking in the developing world is an established success in this mould. Cramming the internet experience onto the small screen may miss the point of mobile entirely.